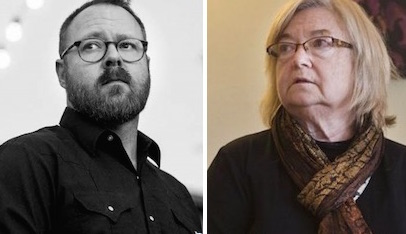 On August 1st, 1966, a sniper rode the elevator to the top floor of the University of Texas Tower in Austin, and opened fire, holding the campus hostage for 96 minutes. When the gunshots were finally silenced, the toll included 16 dead, three dozen wounded, and a shaken nation left trying to understand. It was the first mass shooting at a U.S. school. The 50th anniversary of the event is being memorialized on the UT campus on August 1, 2016.

Our guests on Rag Radio are filmmaker Keith Maitland, director and producer of the highly-touted documentary film, "Tower," about the 1966 sniper shootings on the UT campus, and Claire Wilson James, who was shot by Charles Whitman and lost her boyfriend and unborn baby to the Tower sniper, and who is featured prominently in the film.

"Tower," which won the Grand Jury and Audience awards at the 2016 SXSW film festival and has taken top awards at a number of other domestic and international film festivals, combines archival footage with rotoscopic animation "in a dynamic, never-before-seen way," through which it "reveals the action-packed untold stories of the witnesses, heroes, and survivors of America's first mass school shooting, when the worst in one man brought out the best in so many others." The film will have theatrical release this fall and has been getting Oscar buzz.

A graduate of UT-Austin, Keith Maitland began researching "Tower" after the 40th anniversary of the shooting in 2006, and began production in 2012.  He is also the director of the ITVS-funded, Emmy-nominated, "The Eyes of Me," a year-in-the-life of four blind teens. "Eyes" broadcast on PBS's Independent Lens and was honored with a Barbara Jordan Media Award by the State of Texas.

Claire Wilson James was born in Texas in 1947 and was raised in Dallas. Introduced to Dr. Martin Luther King at age 12 and trained in nonviolent resistance by James Farmer at 16, she worked for the Student Nonviolent Coordinating Committee (SNCC) in the Mississippi voter registration drive of 1965. She was active in Austin Students for a Democratic Society (SDS) when she was the first person shot from the tower -- with her boyfriend and unborn baby both being killed.

In 2013 Claire spoke to a Texas House committee, advocating sensible gun control, an issue to which she has dedicated much energy. In 2013, Maitland and Wilson were both involved in a "living memorial" to the Whitman victims and also helped prod the UT administration to agree to a five-foot tall granite memorial --with the names of the victims etched into its surface -- that will be dedicated August 1, 2016.

Read "Alice Embree: A moving memorial for the victims of the UT Tower shootings," on The Rag Blog (http://www.theragblog.com/metro-alice-embree-a-moving-memorial-for-the-victims-of-the-ut-tower-shootings/); Read "Jeffrey Shero Nightbyrd: Deep in the heart of Texas: The guns of August," on The Rag Blog (http://www.theragblog.com/jeff-shero-nightbyrd-metro-deep-in-the-heart-of-texas-the-guns-of-august/); Listen to our 2013 Rag Radio interview with anti-gun violence activists John Woods and Claire Wilson James (https://archive.org/details/RagRadio2013-04-05-JohnWoodsClaireWilsonJames).

Rag Radio (www.theragblog.com/rag-radio/) is produced in the studios of KOOP 91.7-FM, an all-volunteer, cooperatively-run community radio station in Austin, Texas, in association with The Rag Blog (TheRagBlog.com) and the New Journalism Project, a Texas 501(c)(3) nonprofit. The host and producer of Rag Radio, Thorne Dreyer, is a prominent Austin-based activist and writer who was a pioneer of the ’60s underground press movement. The show’s engineer and co-producer is Tracey Schulz and the staff photographer is Roger Baker. The syndicated show is broadcast (and streamed) live Fridays, 2-3 p.m. (Central) on KOOP (www.koop.org/listen-now), and is later rebroadcast and streamed on WFTE-FM in Mt. Cobb and Scranton, PA., on Houston Pacifica's KPFT HD-3 90.1, and by KKRN, 88.5-FM in Round Mountain, CA -- and as a featured podcast at Veterans Today (VeteransToday.com). Contact: ragradio@koop.org. Running time: 53:11.